I like to think that I am this park's local. It's only a few blocks from my house, and I've been going there as often as possible ever since I discovered it about a year ago. It took me so long to find it because the way there looks like this: 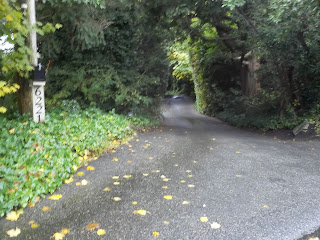 After a set of stairs through a tunnel of rose bushes, the park opens up to a grassy area. In the spring, there's two geese who live there. They've got an adorable life partner vibe going on, and they return every year to walk around slowly and eat things.

The actual bay part of Garrow Bay is pretty nice. After going down the stairs, you can get there by turning left. 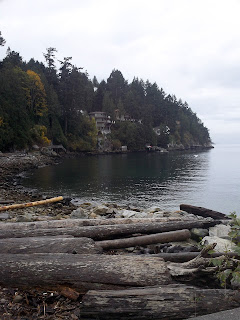 The rocks are an awkward size and shape for walking or sitting on. Besides, they're usually underwater; I visited Garrow Bay at a very low tide. But the sharp rocks are good for catching logs and keeping them in place. As you can see in the picture, there's several rows of logs to walk and sit on.

If you can find a good pair of water shoes to protect your feet, Garrow Bay would be a good place for swimming, although the beach is a little lame and the depth drops quickly (I wouldn't recommend this spot for anyone who isn't a strong swimmer). That's because there's a diving raft! 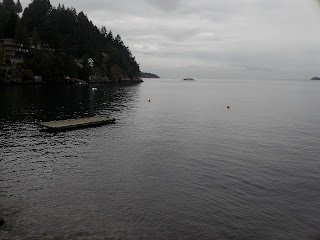 There aren't many diving rafts in West Vancouver. In fact, Garrow Bay Park is the only park in the municipality with one. Even though the beach is hard on the feet, it's worth it. Diving rafts are a lot of fun if you do them right.

That stuff is great, but my favorite part of the park is the other half. 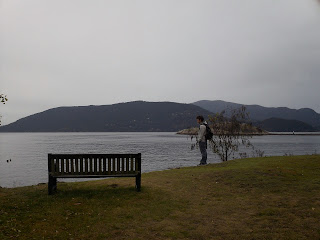 That bench is probably my favorite bench in the entire world. It's got a nice quote on it, but I once spent half an hour disagreeing with it one time that I went there alone. 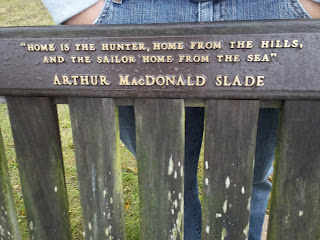 Cole disagrees with my disagreement, but I think that if you define yourself as a hunter or a sailor, then your home is the hills or the sea.

While sitting on this bench over the past year, I've seen all sorts of boats pass by: everything from kayaks to sailboats to ferries. It faces west, so it's perfect for watching sunsets. And then there's the islands... Bowen Island (the big one), Passage Island (the small one), Bird Islet (the really small one with the red light on it), and Whyte Islet (the main attraction). 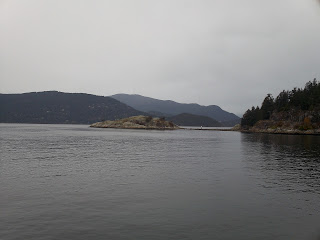 If you've ever been to Whytecliff Park, you're probably familiar with Whyte Islet. It's that awesome rock that's accessible during low tide and super fun to explore. My favorite bench at Garrow Bay Park provides the perfect side view of it. I've always thought the islet looked like a giant sea turtle. On sunny afternoons, you can usually see people climbing on the turtle's back. Unfortunately, there weren't any people the day I took pictures. That's probably because I took the pictures on a dreary Wednesday morning in October. 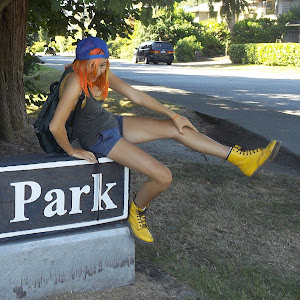 Allie Quelch is a 20-something years old child. She loves parks more than you can possibly understand. In May 2012, she and her best friend Nina embarked on a mission to see all 74 parks in West Vancouver. Here's a map of all of them.

Why West Vancouver? It has a bad reputation for being boring, which is tragic when there are so many great parks to explore. So let's go see them! Check this blog for reviews and pictures of each one.

Also, she has a slogan because she's a dork:
Proper Park Rating: That's park rating... done properly.
These days, Allie is still loves exploring, but has expanded her horizons beyond the community she grew up in. To see what she's up to these days, check out her new blog, Gone Vagabonding.